I am happy to report that Garrison made it back to camp safe last night by 11pm, albeit wet and cold due to the two hour rain storm. The bad news was the he did not find his food bag. Fortunately most of us in the group have an extra meal and bars, that we were able to supply him.

We were off by 8:30ish, and as we were hiking and beginning our climb over the water pocket fold, we realized that last night’s storm was great enough to fill almost every pothole in the WaterPocket fold. Even when we got to the other side of the fold into the Canyons of the Escalante, there was a plethora of water. Thank you Jesus!! That means we had a wet camp tonight. The climb over the fold was steep and all slick rock, essentially petrified sand dunes. Once on the precipice, we were granted panoramic views of the land: Navajo Mountain to the south, the Kaiporowits Plateau to the west, the Henry Mountains to the East, Lake Powel-Hall’s Crossing to the southeast, and even still Bears Ears. By this point, we couldn’t see any longer the La Sal Mountains or the Abajo Mountains.

After a too long break on the precipice of the Fold, we continued to follow the Baker Route down into the canyons. I was really enjoying this part of the day and the route was actually pretty well marked with cairns. Gotta have a keen, sharp eye for this country, lest you end up cliffed out or lost in these canyons. The landscape at this point was surreal. Red petrified sand dunes all over the place, giving the impression that we are in Mars. Yet, looking down in the canyons, you see cottonwoods, which to me always means good water down in there. After a meager 14 mile day, we found a nice camp over a slick rock bench above the canyon floor. Cuban B decided to set tent and sleep creek side. The rest of us decided to cowboy camp tonight, as thus far the weather doesn’t seem threatening. Tonight is the first night i cowboy camp while on the Hayduke and it’s about time. All the stars are bright tonight. The crickets are chirping and the Common Poorwill is singing it’s tune. Only thing missing is the owl. 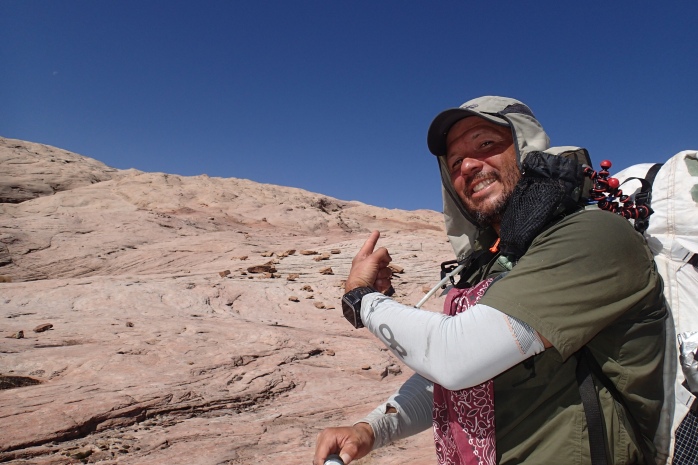 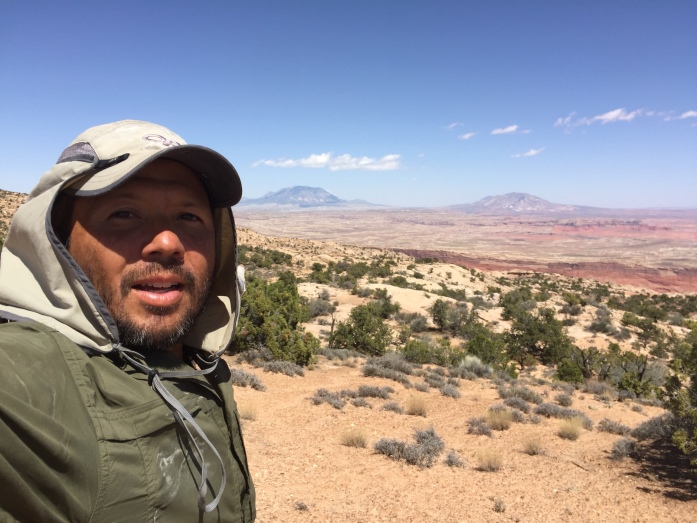 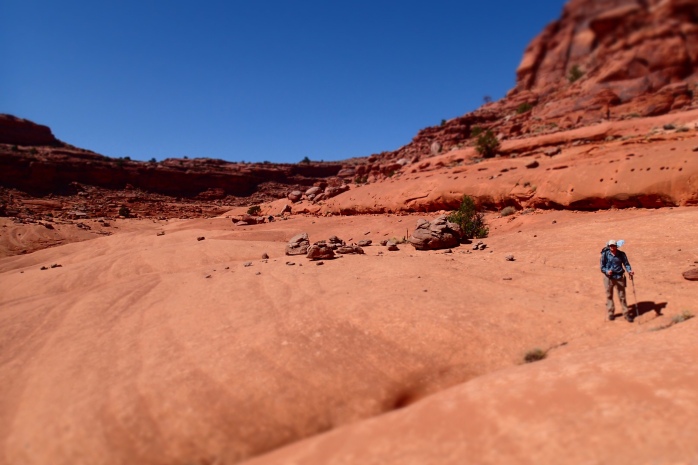 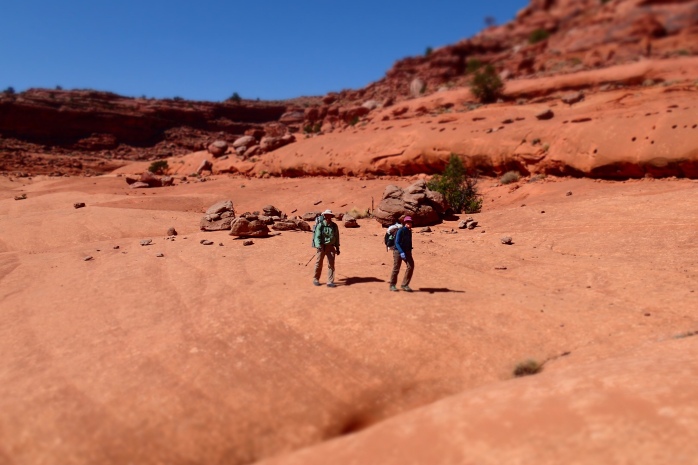 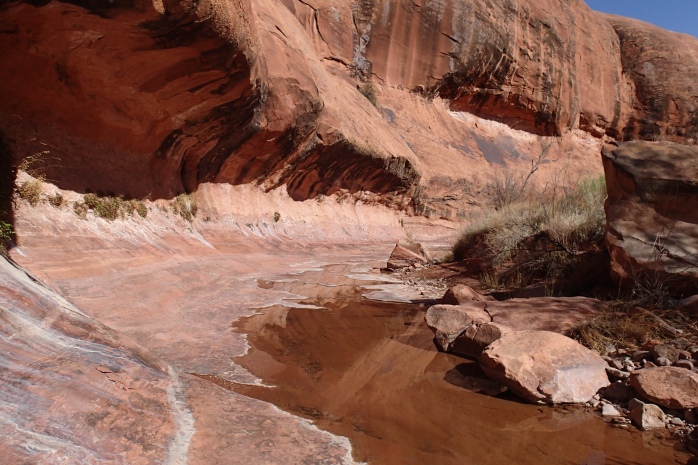 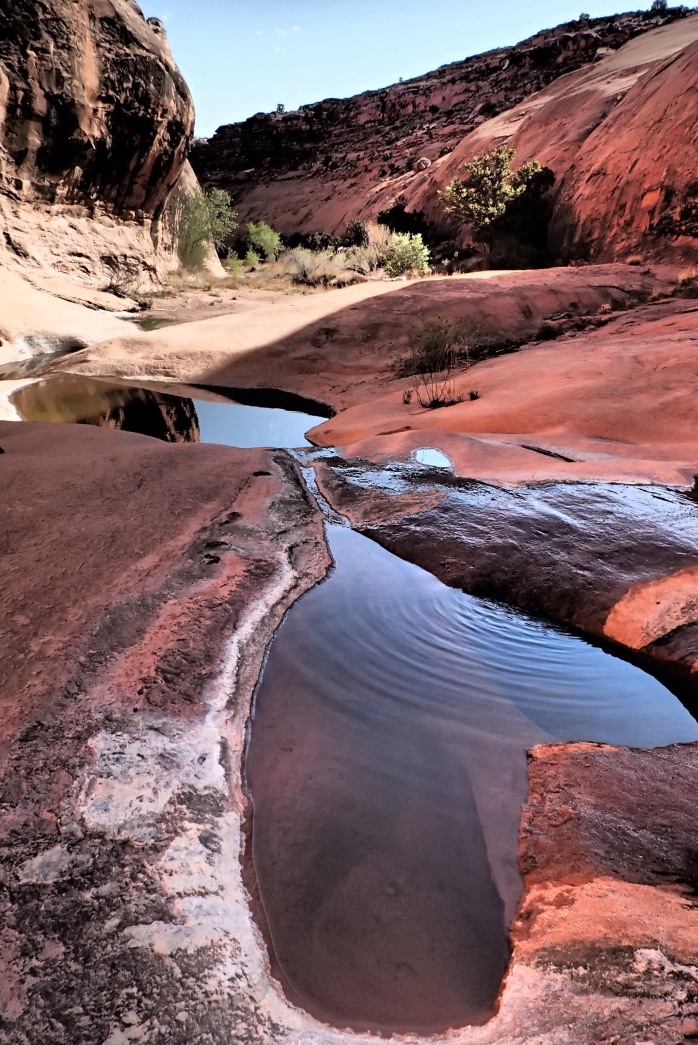 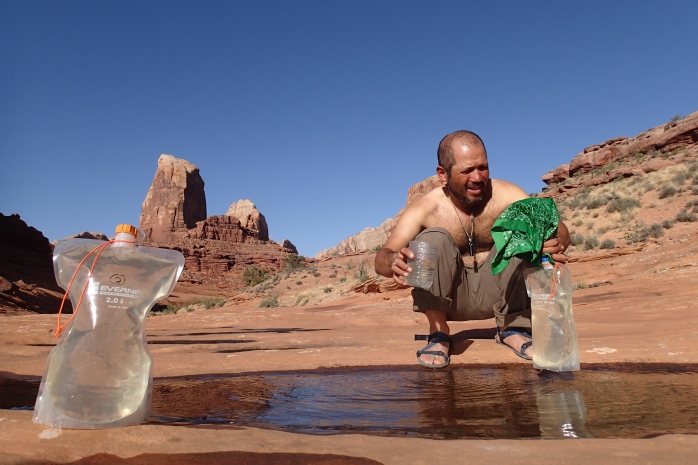 Track me on the Hayduke Trail here.